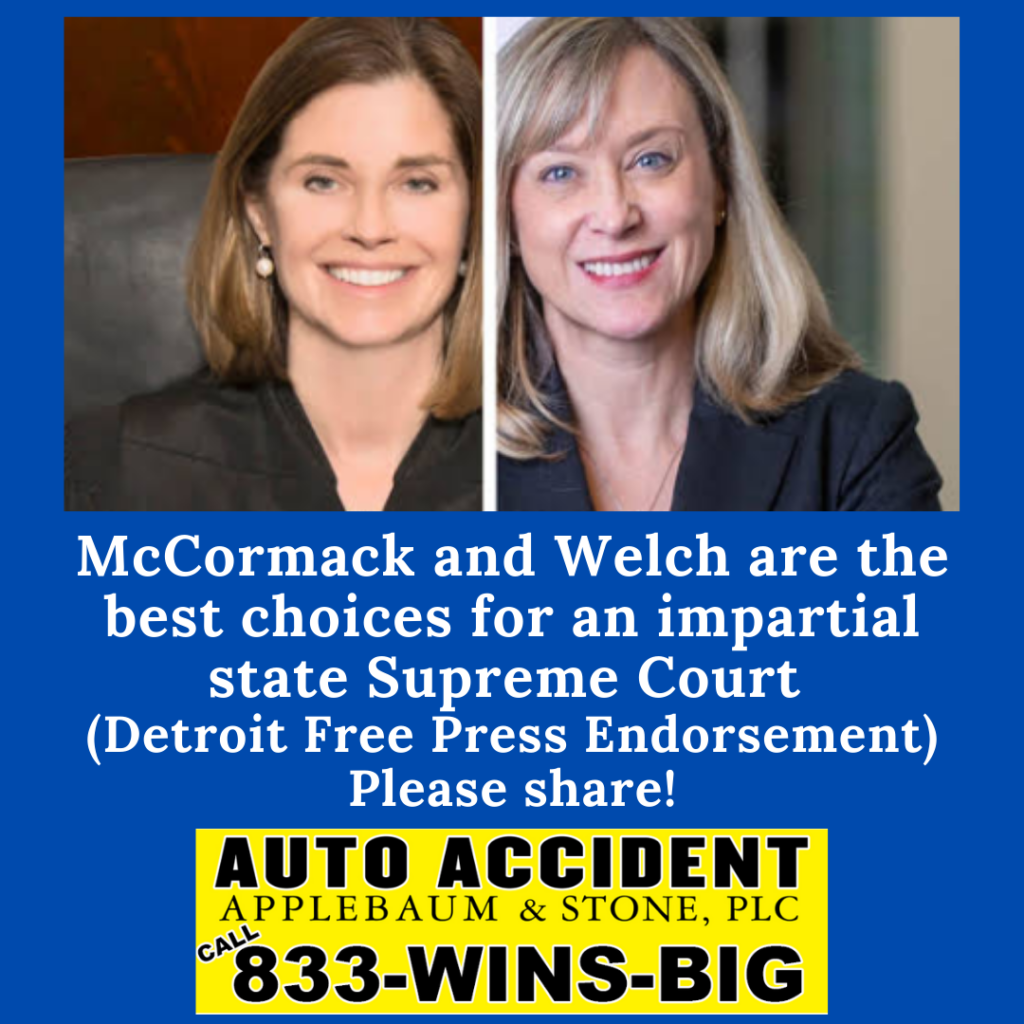 Detroit Free Press Editorial Board
Voters and elected officials who’ve forgotten how to disagree without being disagreeable might look for inspiration to the Michigan Supreme Court, whose seven justices are enjoying a sustained season of collegiality even as the other two branches of state government kick the stuffing out of each other.

It’s a refreshing change for an institution that spent more than a decade mired in hyper-partisan dysfunction before Bridget Mary McCormack, its current chief justice, was first elected in 2012.

Michigan Supreme Court Justice Bridget McCormack
Beginning in the late 1990s, when a flurry of appointments by then-Gov. John Engler secured GOP-control of the state’s highest court, partisan feuding between Republican and Democratic justices flared in a succession of 4-3 decisions punctuated by name-calling and public accusations of corruption. In a caustic message delivered on the occasion of her 2010 resignation, Justice Elizabeth Weaver, a renegade appointed by a previous Republican governor, charged that Engler’s appointees had conspired to promote the interest of the GOP’s anonymous soft-money donors.

Weaver’s departure relieved the Republican majority of its most vitriolic critic, but justices on both sides of the partisan divide trace the court’s current stability and collegiality to the Democratic McCormack’s election two years later.

We enthusiastically endorsed McCormack’s candidacy in 2012, and she quickly emerged as an intellectual leader who commanded the respect of liberal and conservative colleagues alike. In January 2019, just six years into her first term, the court’s GOP majority joined with McCormack’s two Democratic colleagues to elect her chief justice, a rare honor for a jurist nominated by the minority party.

State Supreme Court candidates are nominated at partisan political conventions and rarely win election without the financial and political support of one of the major parties. But under McCormack’s stewardship the current court has come closer to the judicial ideal of non-partisan impartiality than any of its recent predecessors.

McCormack, 54, was one of just two Democrats on the court in 2018 when it issued one of its most consequential bipartisan decisions, a ruling assuring that voters would have their say on an anti-gerrymandering ballot initiative known as Proposal 2. Republican justices David Viviano and Beth Clement joined McCormack and fellow Democratic Justice Richard Bernstein in the landmark ruling, enraging Republican party plaintiffs who sued to block a vote.

Viviano and Clement are both conservatives appointed by former Gov. Rick Snyder, and they do not always see eye-to-eye with McCormack. But their high regard for the chief justice’s integrity is genuine, and she has reciprocated it by tapping Viviano as chief justice pro tem, a position she initiated.

Besides improving the court’s cohesion and collegiality, McCormack has endeavored to remedy systemic flaws in Michigan’s judicial process. A task force she co-chaired with Lt. Gov. Garlin Gilchrist discovered that the population of Michigan’s county jails had tripled, a phenomenon fueled mostly by the incarceration of people charged with non-alcohol related traffic offenses. The task force’s recommendations for reducing incarceration have since been embraced by legislative leaders in both parties.

More recently, McCormack has overseen the extensive technological accommodations and training that have allowed Michigan’s judiciary to continue functioning during the pandemic.

Her energetic non-partisan leadership, professional competence and unsullied reputation for integrity make Chief Justice BRIDGET MARY McCORMACK a bulletproof choice for one of the two state Supreme Court seats at stake in November’s general election, and we are proud to join the diverse array of organizations (ranging from the progressive Michigan Association for Justice to the right-leaning Michigan Chamber of Commerce) in recommending her re-election to a second term.

Choosing the best candidate for the second seat on November’s ballot — a vacancy created by the impending retirement of Justice Stephen Markman, the last Engler appointee among the current court’s four Republican members — is more complicated.

Limited judicial experience shouldn’t be disqualifying. McCormack was a law professor when she was elected. The perspective Clement acquired during extensive tours of duty in both the legislative and executive branches of state government have made her a valuable addition to a court that often referees disputes between the two.

But Kelly, 62, is conspicuously less qualified than either of her non-incumbent rivals. A former assistant prosecutor in St. Clair County, Kelly is married to a sitting circuit court judge. But she fell short in her only previous bid for judicial office, a long-ago district court campaign.

Republicans preoccupied with higher-profile contests seem to have nominated her in the cynical hope that voters will confuse her with Marilyn Kelly, a popular Democratic justice who retired in 2012, or Republican Mary Beth Kelly, who won a state Supreme Court seat in 2010 but resigned after completing only half her term.

By contrast, Swartzle is a thoughtful legal scholar who enjoys the respect of lawyers and judges who do not share his conservative political views, and there is every indication he would enhance the professionalism and collegiality McCormack has tried to cultivate as chief justice.

As Cotter’s right-hand man, Swartzle played a critical role in advancing Republican legislative initiatives we opposed, and he is endorsed by Right to Life, which seeks to end Michigan women’s access to abortion. But there is every reason to believe Swartzle, 49, would be a capable and conscientious member of the state’s highest court.

At the same time we believe ELIZABETH WELCH, 51, is the superior choice for the second seat at stake in November’s election.

Elizabeth Welch, 50, of Grand Rapids is running for the Michigan Supreme Court.
A veteran litigator, longtime school board trustee and environmental activist from East Grand Rapids, Welch is an employment law specialist whose expertise would be especially valuable to a court that is certain to encounter controversies arising from the pandemic and its attendant challenges for employers and workers.

Welch’s pro bono advocacy includes work on behalf of organizations that strive to protect voter rights, and she promises to be a vigilant watchdog against efforts to suppress the vote. She has also served as president of the Michigan League of Conservation Voters, one of the state’s most influential environmental groups.

Assuming McCormack is re-elected, Welch’s election would make her the court’s fourth female justice, ending a long tradition of male majorities. More importantly, it would abet and extend the court’s continuing recovery from an unhappy chapter of partisan rancor.